We came to City Beach several weeks ago and visited Clancy’s which was a nice experience, so we made a special visit last week to check the menu at Hamptons and make sure that it had several options suitable for my parents. My dad loves a steak, and they had a nice fillet on the menu so we booked for a Thursday night. It’s an impressive building in an impressive location right on City Beach with a vast inside dining area and a more casual decking area.

We were seated fairly close to the panoramic sea view window just before sunset, and the waitress brought table water. Another waitress took our drinks orders, and I asked for lager shandy for my parents, just one bottle of lager shared between two. Although the waitress seemed to understand what I wanted, a different waiter delivered the drinks, and they were given a full pint glass of lager shandy each! I ordered freshly squeezed orange juice, but received a juice from a bottle – it was okay, but not really what I expected. 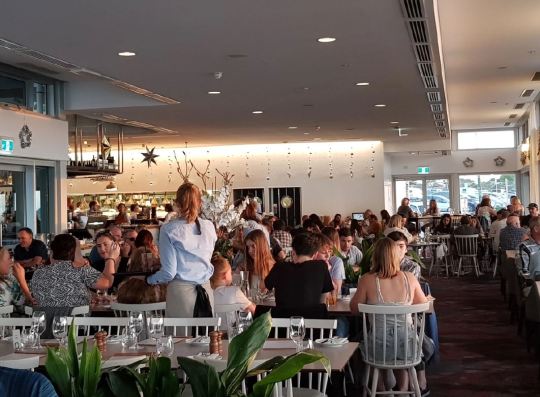 We ordered some bread and crispy buttermilk chicken with chilli lime aioli to share as a starter. The chicken was plentiful, and nicely cooked with a beautiful crunchy coating. The aioli could have been plain mayonnaise – I couldn’t detect any lime, chilli or garlic.
However it was nice mayonnaise, and the bread with olive oil and balsamic was fresh and tasty. Apologies for the chicken photo – I didn’t take the picture until we had eaten half of it. 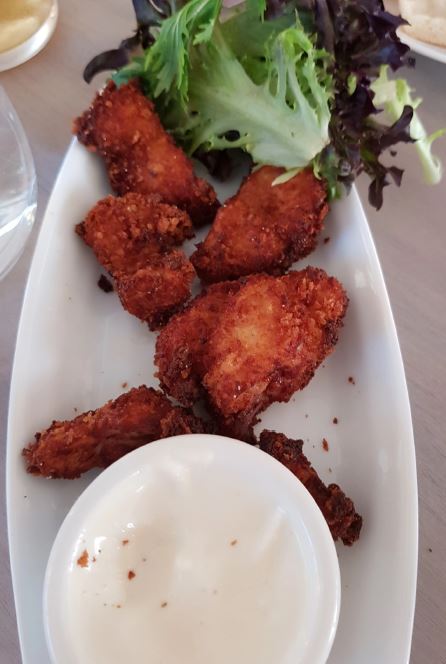 For mains, my dad ordered the beef fillet – medium to well done (not my preference, but he knows what he likes), my mum ordered the gold band snapper, and myself and my husband ordered the prawn and crab linguine.
When my dad’s fillet arrived it was delivered by a different waitress to the one who took the order and she stated that it was medium. Dad questioned this, and the waitress said that she would check with the kitchen, but she didn’t come back. He started to eat it and it was in fact medium, so not his preferred version, but he did enjoy it and ate it all. His only gripe was that the asparagus was very undercooked and he found it unpleasant to eat.

Undercooked veg seemed to be a consistent problem. My mum’s snapper was delicious and the mash was lovely, but the broccolini was almost raw and she left half of the broccolini because she couldn’t eat it. I understand that most veggies are just blanched now, but there’s a fine line between cooking them enough and leaving them almost raw. It felt as if the restaurant staff were very busy and under the pump.

The blue swimmer crab and prawn linguine came with garlic, rocket, tomatoes and chilli. The first thing that we noted was that mine was fairly dry whereas my husband’s portion had a lot of sauce, so we transferred some of his sauce to mine.

The rocket was dry and brittle and to be honest, I left most of it. The pasta was very nice but I did find quite a few shards of crab and prawn shell in it, which made it a bit tricky to eat. I understand that seafood can come with some shell fragments, but I found that I was picking a piece of shell out of every second mouthful. I did eat most of it, but left a pile of prawn tails, shells and fragments.
My husband had a much worse experience with his linguine. He had the same experience as me in terms of shell fragments, but towards the end of his meal, a prawn leg became lodged at the back of his mouth and he started to choke. He rushed off to the gents and was luckily able to dislodge it after retching and coughing, however it did spoil his experience of the meal. He tried another mouthful, but that mouthful had some shell in it, so he left the rest.
When the waitress collected the plates, I asked her to mention this to chef, saying that it wasn’t pleasant to have so many shell fragments and almost choke on the meal. I also mentioned the undercooked veg. When she came back, she pretty much disagreed with us !
She said that she had spoken to chef and the crab meat is ‘bought in’ as a de-shelled item, and she shrugged as if to say it’s not their fault. She then brought the dessert menus, which we decided to ignore.

When paying I told the cashier that the meal was not up to standard and she apologised but did not offer any other compensation. She asked if I wanted to speak to the manager, which I did, and although very apologetic, this is a summary of what she said:

She did apologise a lot, and after my dad pointed out that we shouldn’t pay for the linguine, she very reluctantly deducted the cost of one of them. However I could tell that she was unhappy with doing this and I felt that we were being accused of making a fuss over nothing.
Hamptons is a spectacular venue, but the chefs need to take more care with all of the dishes. If they want to charge top class prices then the food should be perfect every time whether they are busy or not. I also wondered why they were not using fresh crab – as a restaurant right next to the ocean, you would expect the fish and shellfish to be freshly prepared, not bought in and pre-packaged. I would expect fish chefs to pick over any crustacean meat to ensure that all shell is removed in the same way that fish should be filleted properly, and if the chef is filleting and preparing fresh shellfish, then they have full control of what goes into the pan. The customer experience was the worst part of the night- they were very unhappy with any criticism, and I felt that we were not important to them. I won’t return for this reason.
If they had apologised straight away and showed real concern for my husband’s experience then maybe I would give them a second chance, but tonight I left with a very bad taste in my mouth. 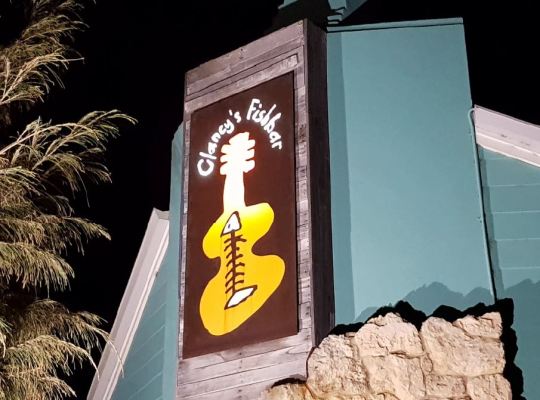 Clancy’s is a busy quirky bar and restaurant right on the beach at City Beach. Family and pet friendly, and quite lively, there are many tables overlooking the beach and ocean.
Clancy’s don’t take bookings, but we were seated fairly quickly on a Friday night, at a window table with high seats. 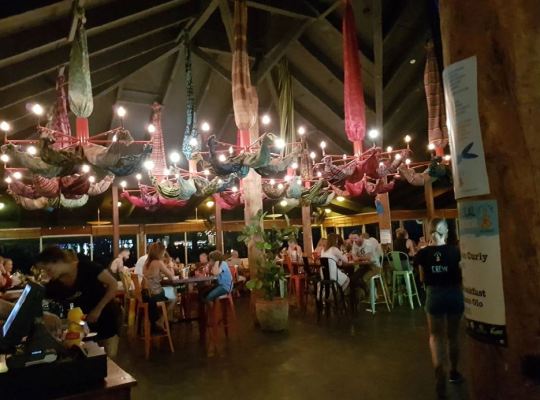 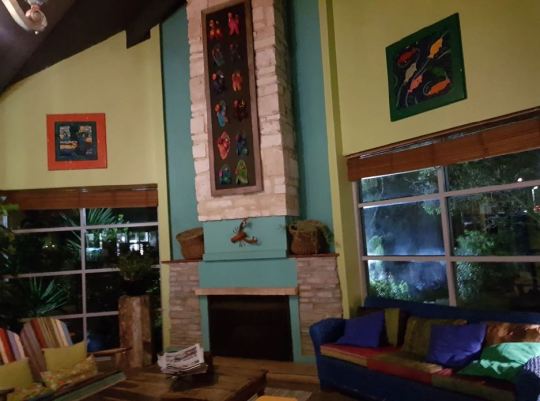 We chose a glass of Margaret River sauvignon blanc to start – nice, but a bit more acidic than my favourite Marlborough sauvs. 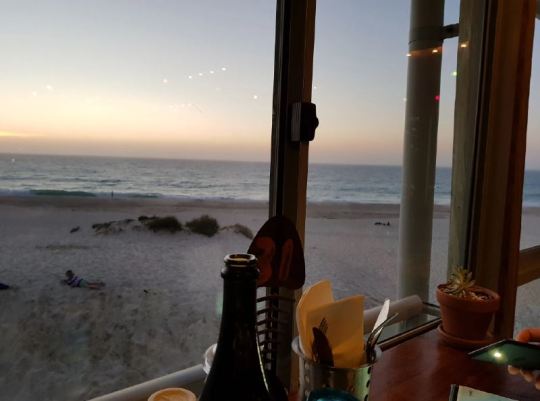 The menu contains fish of course, snapper, barramundi, trout, salmon, and sefood
favourites including oysters, squid, fish tacos, mussels and paella. You can order smaller dishes to share or larger dishes for a traditional main course.
My companion chose the pulled pork burger. It was nicely flavoured but not great value considering that it did not contain much pork.

I chose the grilled barramundi and chips with mayo and slaw. It was lovely, fresh, there was plenty of it, and the combination was really well matched. 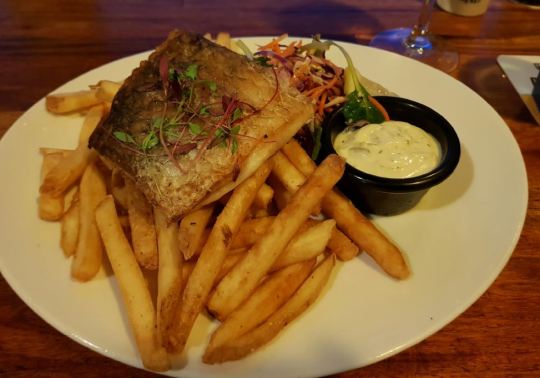 We didn’t have room for dessert, so left it at that. The meal was nice but not outstanding, and it was quite expensive for what we had. I would go back because it’s a great location, but I am not sure that I will be a regular.