I had a party this weekend and decided to make terrine for the food table. I thought it would be difficult and take ages, but it was surprisingly easy and it turned out really well. 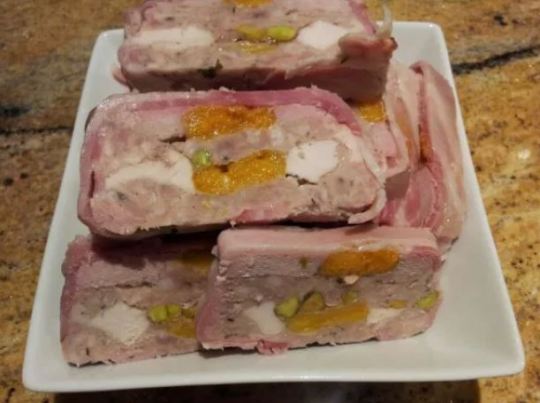 I discovered that you can really make it up as you go along, you can use pretty much whichever meats you like, and you can also add herbs that you like. If I were to make this again I might add some vegetables to it for a change of texture.
I made the terrine from the recipe on the BBC Good Food page but adapted it by adding chicken. I found that the quantities were enough to make one full sized terrine and one smaller one. I used standard loaf tins to make it.

Ingredients
300g pork tenderloin
2 medium sized chicken breasts
2 packs of sausages or an equivalent amount of sausagemeat (if using sausages, remove the skins)
a bunch each of thyme, parsley and chives, finely chopped
approx 12 rashers of streaky bacon (or use long cut bacon and save the meaty part for brekkie)
a splash or two of port or brandy
100g pistachios – shelled
a bag of dried apricots (or you could use prunes or sour cherries)

1. Chop the pork tenderloin and chicken into bite sized pieces and soak in the brandy for a while – just use a few tablespoons of brandy and stir it occasionally. Add a little salt but not too much because the bacon and sausages will add salt.
2. Heat the oven to 180 deg C.
3. Lightly butter two standard loaf tins.
4. Line the tins with the streaky bacon, try not to leave any gaps. If found that my rashers were too short to wrap right around the terrine but it still worked out ok.
5. Sprinkle some of the mixed herbs on the bacon, then line the bottom with pork fillet.
6. Sprinkle with more herbs and some pistachios – you can actually use quite a few pistachios, I was a bit sparing with mine.
7. Layer some sausagemeat on top, sprinkle with herbs again, and place a line of apricots down the middle.
8. Now layer with chicken, add more herbs, and finish with another layer of sausagemeat.
9. If there are any ingredients left just tuck them in where you can – you can do another layer of apricots or pistachios if you like.
10. Wrap the bacon over the top of the terrine and squash it down firmly – I covered it with foil and pushed the foil down quite hard with my hands.
11. Wrap the loaf tins in heavy duty foil, use a few layers and wrap them tightly.
12. Half fill a roasting tray with hot water to make a bain marie, and place the loaf tins in the water. Don’t overfill the roasting tin, the water mustn’t get into the terrines. My water level was approx two thirds the height of the tins.
13. Place the roasting tin containing the terrines into the oven and cook for 1 to one and a half hours.
You can test them with a skewer or a meat thermometer to see if they are done.
14. Take the terrines out of the water bath and let them cool completely. While they are cooling place a few large cans on top to weigh down the meat. This will give you a more tightly packed result.
15. Now transfer then to the fridge – still weighed down and leave overnight.
16. My terrines kept ok in the fridge for a few days before serving. When you turn them out, run a knife around the outside of the bacon, tip them over and tap the tin. The surface will be covered in a thin layer of meat jelly which is quite nice. 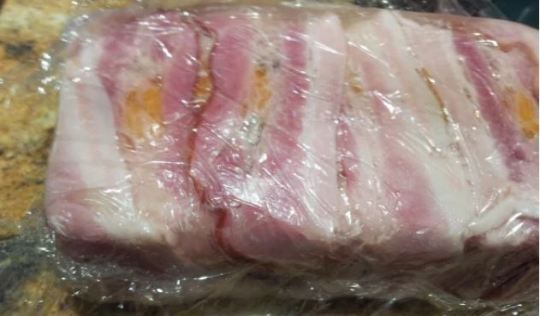