Bayside Kitchen is in a lovely location, right on Matilda Bay, and we attended for a retirement lunch with a dear colleague one sunny Friday. The menu is quite varied with breakfast, brunch and lunch options. There should be something on the menu to suit most palates.

The drinks menu has a variety of juices, coffees, wines etc, I chose a Morning Glory juice – orange, apple and mint, and this was lovely, bursting with fresh flavour.

I chose the mushroom bruschetta with feta, poached egg, kale and candied walnuts. The flavours were really good. It was a little heavy on the bread, but otherwise a nice lunch.

My colleague chose the chilli mussels with white wine and sugo, which he really enjoyed, and he had just eht right amount of bread to soak up every last drop of the wonderful sauce.

Another colleague chose a vegetarian pumpkin salad which she thoroughly enjoyed.

The location is everything here, the staff are friendly, and the cafe has a warm vibe about it. The food is good but not amazing, however it is definitely worth a visit to while away time with friends on a sunny Perth afternoon.

Matilda Bay Restaurant is right on the Swan River. It’s a popular area for families with many people jogging, walking dogs and picnicking in the vicinity. The view from the restaurant is lovely – yachts and ducks, with King’s Park and Mounts Bay Road as a backdrop.

The thing that immediately struck me was that the service was haphazard. The waitress showed us to our table, only to decide that it wasn’t as expected, and ushered us to an alternative table. We then waited for 20 minutes before being offered a drink. I chose a mocktail (I chose the only one that was compatible with my food intolerances), and my companion chose a mocktail too, explaining that we would not be drinking alcohol. The drinks were nice and well-presented, but the waiter insisted on trying to sell us some wine despite our earlier conversation about not drinking alcohol.

When the bread arrived, it was accompanied by butter, which I cannot eat, so I asked for some olive oil instead. Two waiters told me that the olive oil was on it’s way, but it didn’t arrive until I reminded them again, and 20 minutes later, my bread was cold.
The starters, however, were very good.

I had kingfish sashimi with squid noodle salad:

My only minor criticism was that there was a bit much of the squid noodle salad. The wasabi was lovely and hot, and the kingfish very fresh.
My companion chose prawns in a chick pea crust with a tomato salad and a spicy aioli: 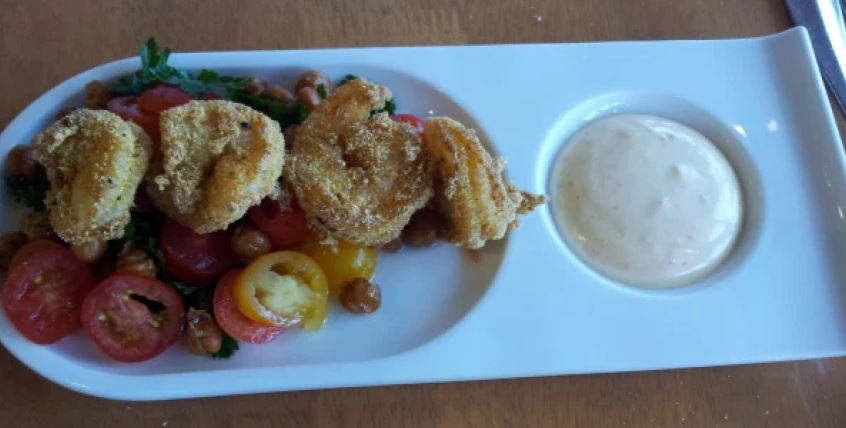 The prawns could have been a bit larger, but overall it was a very pleasant dish. For main course I chose a trio of seafood – prawns, marron and crayfish:

Both main courses were overcooked to some degree. The steak should have been medium rare, but it was more like medium to well done.
The seafood was varied – the prawns were perfect, the marron was nice but not amazing, and the crayfish was overcooked. Such a shame because the cray should have been the star of the dish, and it was a real disappointment.
Matilda Bay need to step up their game if they want my custom again. I am so glad that we had an Entertainment Book Card which gave us 25% discount. I would not have been happy to spend $200 on this meal. The service could be much better, and the chefs need to pay a bit more attention – cooking seafood and steak is not difficult.