I have been wanting to try Bumplings for a while. This is the outlet run by Brendan Pang, an Australian Masterchef contestant known for his skills at making dumplings and noodles. 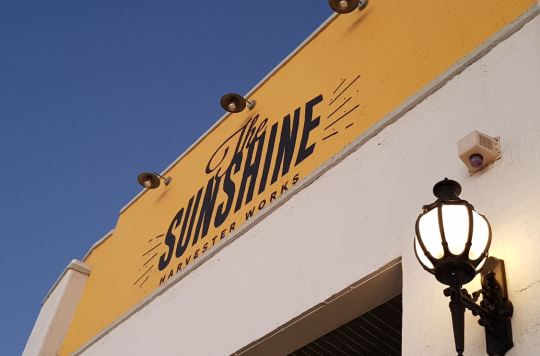 The outlet is situated in Sunshine Harvester Works, just opposite the Fremantle  cruise passenger terminal on the corner of James Street and Beach Street. Open for just three days a week, we arrived early on a Saturday to make sure that we got fed before the supplies ran out. They open at 5pm, so we arrived at 5:20pm, using the large car park just along Beach Street, and already a long queue had formed.

We joined the end of the queue, and there was quite a lot of queue-jumping happening – people saving a place in the queue for 6 of their friends to arrive later and join them! So even though we joined the queue fairly early on, the number of people in front of us seemed to increase fairly often, and we didn’t get to the front of the van to be served until we had queued for an hour.

Getting seated was another mission. Bumplings is not the only outlet in this venue, and it seemed that several families had arrived early and grabbed all of the large tables. There is quite a lot of seating, but every seat was occupied and it was some time before a table became vacant.

Although we would have preferred just veggie dishes, we chose to go omnivore for the night and try a variety of the dishes – after all, we’d come all this way to eat food cooked by the Masterchef dumpling master.

Once we had ordered and paid, we were told that it would be another 40 minutes before we received our food, which was a little disappointing, and we were glad that we had put 3 hours on our parking ticket.

Fifty minutes later, the first dish to arrive was spicy pork dan dan noodles. The flavour was great, nice and spicy, slightly al dente noodles, but it was just lukewarm and would have been better if it were hotter. 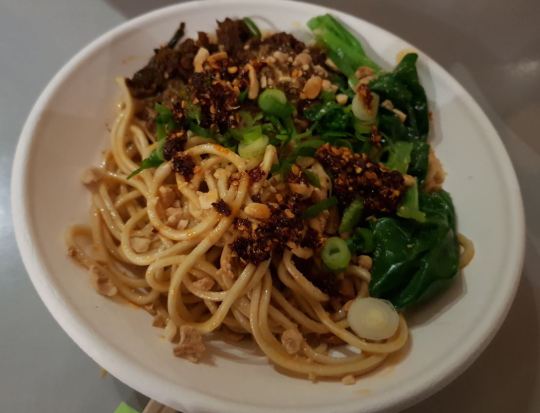 Next came the Mauritian pork and prawn spring roll which was really nice and hot, but very heavy on the pork, I couldn’t detect any prawn. The dipping sauce was really cold as if it had been refrigerated, whereas room temperature dip would have been fine. The filling was generous and this was probably the best value dish. The accompanying veg pickles were great.

Lastly we tried the veg dumplings in the mushroom broth. Excellent broth with a really nice depth of flavour, but the dumplings were a little disappointing. The pastry was quite thick and the filling didn’t deliver on flavour, also the whole dish was lukewarm. 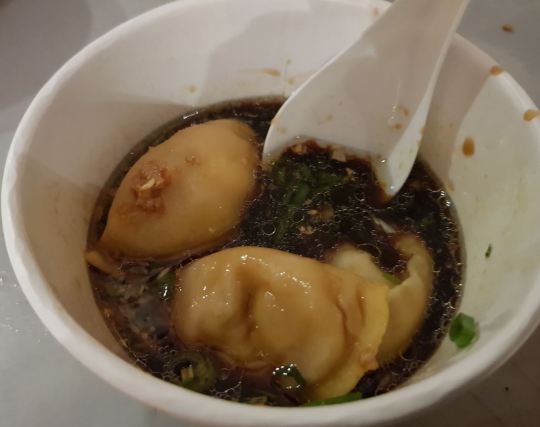 Thinking about it, the warmth of the dishes is probably dependent on how long the waiter walks around looking for your table, and I did notice that some waiters walked around several large circuits before finding where to deliver the food.

So would I go back? Probably not. The whole venue could do with some better seating and queue organisation. It was great to experience Brendan’s food, but the 45 minute drive to get there, the hour in the queue and then the 50 minute wait for the food just made it all seem too hard. The food was good – the highlights were the mushroom broth and the chunky spring roll – but it wasn’t blow-me-away amazing, well, not enough to make me want to do it all again. I am pleased that Brendan’s business is booming – he was a great contestant and clearly loves making dumplings.

Lily Paris is a little coffee shop and patisserie just on the edge of Fremantle markets in South Terrace. They are only open on Fridays, Saturdays and Sundays, like the rest of the markets. Famous for their macarons, an array of beautifully presented cakes and macarons is on display.

After much deliberation we chose two cakes to take away – a lemon meringue croughnut which the lady made up fresh and blow-torched right there and then, and a chocolate caramel tart.

This was delicious, a lovely crispy croughnut with a tangy lemon curd filling and a soft meringue. Yum.

The chocolate caramel had thin short pastry with a rich dark chocolate ganache, nice dark caramel which wasn’t too sweet, and delectable truffle balls all round with a crispy chocolate disc on top. Equally yum and a very grown up dessert.
When you are in Freo on the weekend, save your sweet treat for Lily Paris – you won’t be disappointed.

This was my first trip to Fremantle for brekkie, and I was very pleased that we discovered Moore and Moore. It’s a long drive, but I will be happy to go back for a return visit. The cafe is within an art gallery, and it is very interesting, a little kitsch in places, but very warm, cosy and inviting – I really loved the atmosphere. 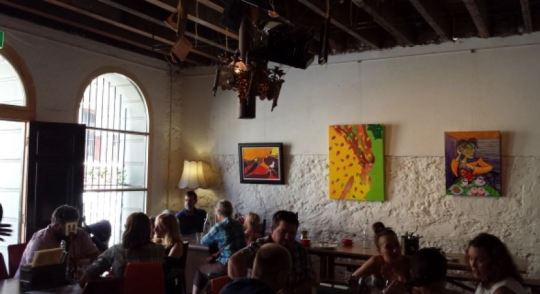 A lot of the dishes on the menu are vegetarian. If you want meat the only options are bacon and meatballs, and if you want fish, there is a smoked salmon dish, however, as a meat eater, I found the vegetarian dishes very appealing and the lack of meat did not worry me.
I chose the burnt butter, sage and roast pumpkin mash. This consisted of roast pumpkin spread on turkish toast with two poached eggs on top, rocket, and tomato relish. I added bacon as an extra. The whole dish was delicious – the bacon good quality and nicely crispy, the pumpkin mash slightly sweet and the eggs cooked perfectly.

My friend Karen chose the smashed new potato rosti. This consisted of mustard seed, spinach and romano cheese potato rosti topped with a poached egg, avocado, green olives and caper salsa, rocket and tomato relish. Karen really enjoyed it, she has been a vegetarian for quite a few years and found it tasty and the flavours quite interesting. 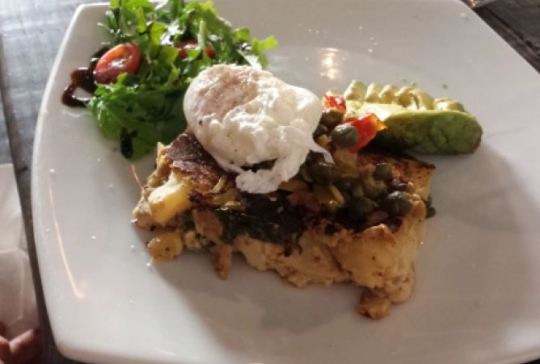 As well as the food, the coffee and the drinks were really good – fresh orange, home made lemonade – all refreshing and delicious.
I really loved Moore and Moore, the menu is inventive without being ridiculous, the flavours all go well together and it is nice to see a menu with a wide vegetarian choice. The building is lovely – the Moores building – it is a heritage listed building that used to be an old merchant’s warehouse. There are various rooms where you can dine including an alfresco area out the back. When we were there a musical trio were entertaining everybody in the walkway. It was very typically Fremantle – a bit different, a bit quaint and very colourful. I loved it.

Tucked away in Collie Street, Fremantle, this is one of the best cafes in Perth. It’s quirky, the food is amazingly good, the staff are lovely, and everything is prepared with love and care.

When we arrived slightly early, our table wasn’t quite ready, but the staff were really friendly and helpful and did their best to get us seated as soon as possible. The menu is funny – dishes have very amusing names like Orange is the New Stack – a pancake stack with burnt orange curd and toasted almonds or The Dating Game – a cauliflower dish with dates, cavolo nero, kale, maple miso dressing, pomegranate, pine nut and parsley crumble.
I chose a hot chocolate to drink, made with coconut milk. It tasted superb, and came with marshmallows and a little duck shaped white chocolate speckle. 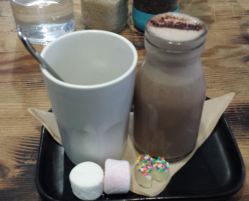 My companion chose Beans Beans Good for the Heart – smoky beans, poached eggs, plenty of toast, a lovely cheesy bechamel sauce, a touch of sweetness from the bacon jam and a nice crunch to the cheese crisp. All in all a wonderful dish. 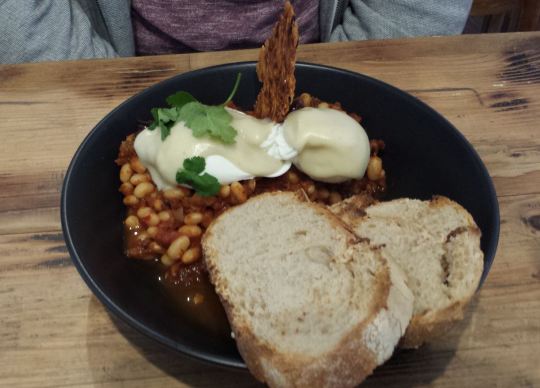 Every mouthful was a joy and I can’t wait to return to Duck Duck Bruce. They do lots of good work in the local community and help to support stray animal homes. You can tell that the staff really enjoy working there. I’ll be back very soon and I might just try the pancakes next time.

I have been wanting to try Bread In Common for ages, and a Sunday morning seemed like the perfect opportunity, so we popped down there for brunch. It’s a large airy restaurant, possibly a converted warehouse, on Pakenham Street. The kitchen is open and run in a very calm manner. The tables are long benches, and there’s a hubbub of activity with customers chatting, coffee being made, fruits being juiced, and the takeaway counter selling bread, pies, pastries and cakes. 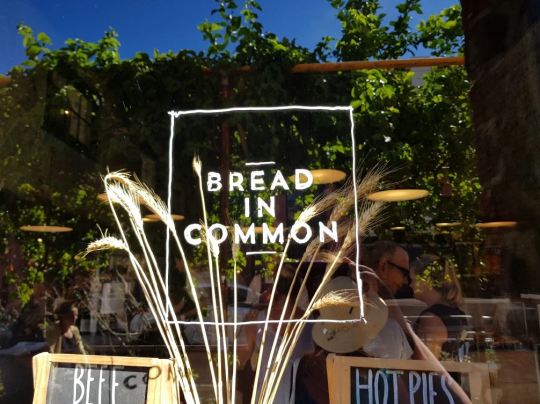 We started with a coffee while we perused the menu and were presented with a Brazilian single origin from West Perth’s Mano a Mano. Very nice rich coffee. 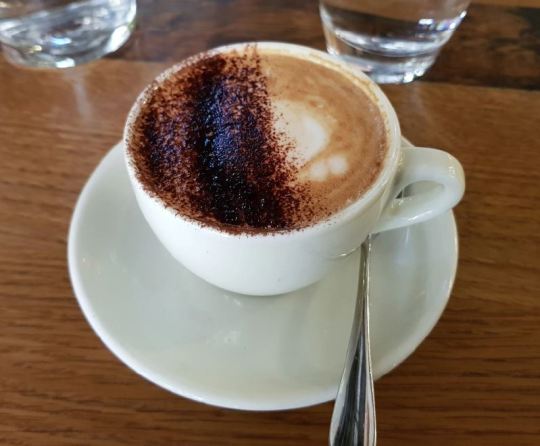 The menu is jam packed full of yummy options and everything sounds appetising. I was
very tempted by the sweet options of plum compote and yoghurt, fruit salad with coconut yoghurt, french fruit toast with peaches and cream cheese, and waffles with banana, cream cheese and maple. Savoury options were equally good with veggie options of mushrooms and parmesan, corn and jalapeno and I eventually narrowed it down to choice between pork meatballs with fried eggs and hot sauce, and beef brisket benedict. The benedict won, and I wasn’t disappointed.

Wonderfully chunky but fall-apart brisket with a hunk of fresh bread, poached eggs,
hollandaise and sauerkraut – every mouthful was a joy.
Looking around, Bread In Common makes its own pickles and conserves as well as the
bread that it is famous for. 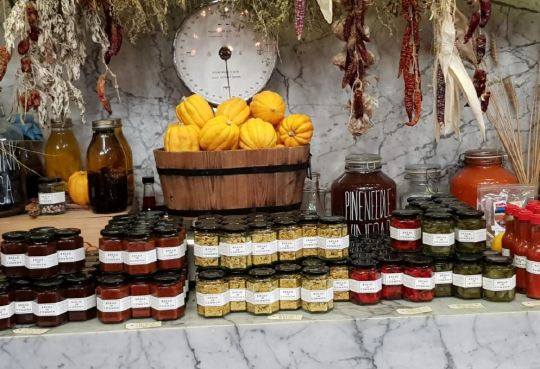 We left with very full bellies, and an additional half loaf of fruit bread. It’s one of those
places that you have to keep going back to so that you can try everything. 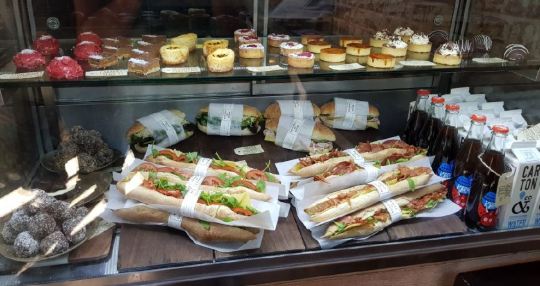 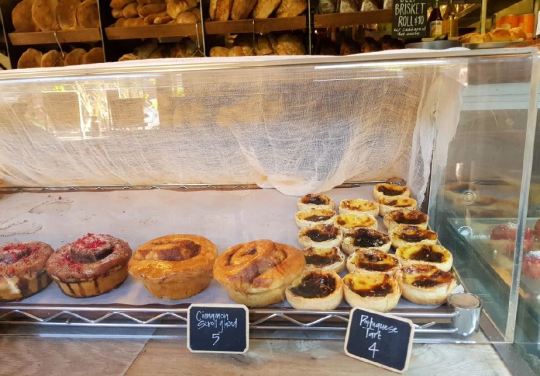